I have been creating the ANIMALS series in the motif of animals. What I pursue throughout the series is not the reality of animal objects but the reality of human lives.
This museum also has the similar idea, which places the most importance on living humans, not the museum, and is open to changing itself depending on thoughts and impressions of the people who visit it. In this respect, I feel new stance of the museum.
The ANIMALS sculptures are installed at such a museum with a scenario that, while walking from the forest, they just dropped by the museum, but, as it is too cozy for them to leave, they are still there. A big bear looking at the Tateyama Mountain Range in front stands in the center and different shaped bears, such as lying bear and cubs, are arranged beside. I would like to create an attractive space with sculptures as they naturally exist in the spacious open space on the roof.
Atsuhiko Misawa

Mr. Misawa was born in Kyoto in 1961. He received his masters of arts in sculpture from Tokyo National University of Fine Arts and Music (present Tokyo University of the Arts) in 1989. In 2000, he started production of the ANIMAL series of wooden life-sized animal sculptures and first held his solo exhibition ANIMALS at Nishimura Gallery, Tokyo. In 2001, he received the 20th Hirakushi Denchu Prize. Since 2007, the traveling exhibition “Misawa Atsuhiko ANIMALS+” was held at the five museums, starting at the Hiratsuka Museum of Art. Solo exhibitions have been held at many museums around Japan, attracting many visitors. Recent solo exhibitions include ones at Mie Prefectural Art Museum and Hamamatsu Municipal Museum of Art in 2013, Takamatsu Art Museum, Iwate Museum of Art and Shunan City Museum of Art and History in 2014, Nariwa Museum, Takahashi, and Kushiro City Museum of Art in 2015. He is one of the hottest sculptors in Japan now. His art collection books include “Misawa Atsuhiko ANIMALS” (Kyuryudo Publishing lnc 2002 : First collection book), “ANIMALS No. 3” (Kyuryudo Publishing Inc. 2013) and “Dobutsunoe” (Seigensha 2013). 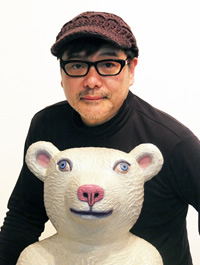