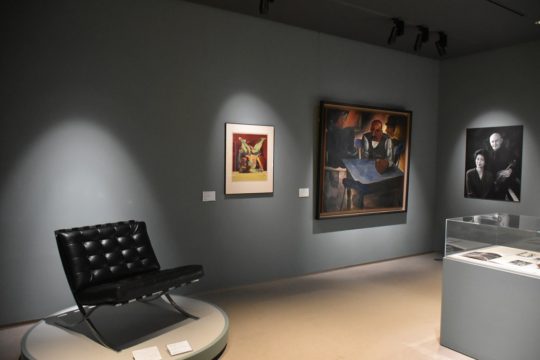 In this season’s special exhibition “Goldberg and Asia,” we introduce you to Goldberg’s relationship to Asian countries by primarily focusing on items that are related to Indonesia and Japan.

Being a Jew, Goldberg fled the Nazi-controlled Germany before World War II broke out and set out on a concert tour. He visited Japan for the first time in 1936 and gave a concert.
Then, he was captured by Japanese soldiers in Java (a Dutch colony at the time) on his way to the US, where he was going to claim political asylum.
He was detained there for almost three years until the end of the war.
Against this hardship, it seems that Goldberg was interested in the Indonesian culture, especially in the dancing, music, and puppet show traditions of the island of Bali. He owned photo books and pamphlets about dance as well as masks and puppets that probably originated in Indonesia.
In this exhibition, we introduce you to items related to Asia formally owned by Goldberg, currently in the possession of The Center for Music Research at Tokyo University of the Arts.
We hope you find these items interesting as well as those belonging to the collection of Toyama Prefectural Museum of Art and Design.

*We express our sincere thanks to The Center for Music Research at Tokyo University of the Arts Szymon Goldberg Collection for their generous support including the lending of materials in organizing this exhibition.