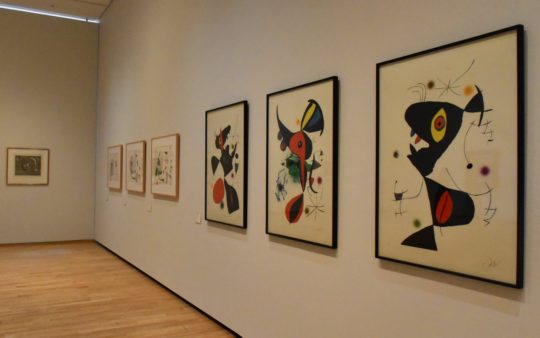 This exhibition showcases the highlights of 20th-century art across five small themes, including Human Figure and Still Life which are main themes in many works of art, works that play on Color and Form, as well as works by Joan Miró and Japanese Painters in American Art Scene.
Joan Miró is the first international artist whose works are part of our museum’s collection, and this is the first time that the Collection Exhibition will feature an artist.
Works by international artists include Alberto Giacometti’s sculpture Femme debout, paintings such as Francis Bacon ’s Lying Figure, and works in the special feature of Joan Miró such as “Series Ⅱ” and the “Oda a Joan Miró” series.
Japanese works include paintings such as Léonard Foujita’s Two Nudes, Shusaku Arakawa’s The Signified or If, as well as the paintings of Yasuki Kanayama, an artist with deep connections to Toyama prefecture.