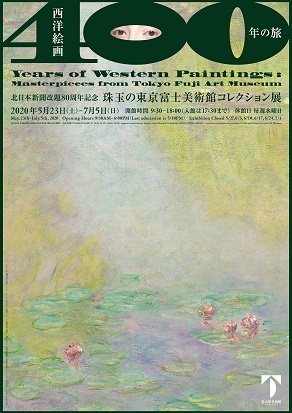 Tokyo Fuji Art Museum opened in 1983 in Hachioji City, Tokyo, and houses a collection of around 30,000 artworks across various genres and periods such as paintings, prints, photographs, sculptures, ceramics and lacquer ware to armor, swords, and medallions from Japan and other countries in the East and West. In particular, it is widely known in Japan and abroad for its extensive collection of Western paintings ranging from the 16th-century Italian Renaissance to the 20th century that is highly diverse in both its historical and geographical scopes and which offers visitors a panoramic view of the history of Western painting.
This exhibition features 83 masterpieces carefully curated from this collection to showcase 400 years of the history of Western painting from the latter half of the 16th century to the 20th century, including works by popular modern artists such as Claude Monet, Pierre-Auguste Renoir, Paul Cézanne, Vincent van Gogh, Paul Gauguin, and Marc Chagall that have dazzled fans of art worldwide, as well as works by masters of art prior to the modern period such as Tintoretto, Frans Hals, Anthony van Dyck who are rarely exhibited in Japan.
Please don’t miss this opportunity to experience the delight of standing before 400 years of Western painting and indulging in the charms of the vast and profound world of Western painting as well as those of individual works.