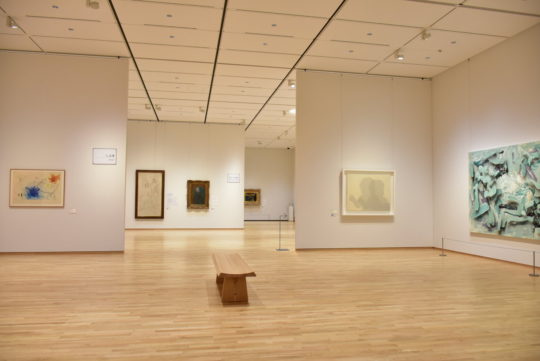 20th century art will be looked at with a focus on five sub-themes.

At 【Trick, Illusion】, we will present works from Akira Komoto, who uses photographs to create scenes that fuse nature together with paintings, as well as works from Kenji Hoshi, whose brushwork appears to float above the canvas.
【Color : Blue】 centers on abstract works whose main theme is the color blue, such as Lucio Fontana’s 《Concètto spàziale - Attése》 and Josaku Maeda’s 《Blue series・Blue (№16)》.
At 【Landscape】, visitors can see works by Christo & Jeanne - Claude, as well as their signatures in the guestbook from when they visited the museum in 1985.
【Human,Human Figure】 will feature works such as Shinro Ohtake’s three-dimensional paper piece, 《Man》, as well as a print piece of Francis Bacon’s 《Triptych inspired by Orestia of Aeschylus》, which was seen in the film RoboCop.
At 【Splash】, visitors will be astonished by two monumental works: 《Carpe - volant》 by Toshimitsu Imai, which was painted live in 1991, and 《T1989-U12》 by Hans Hartung, which was painted during his later years.