Higashiyama Kaii: The Mural Paintings in the Miei-Do at Toshodaiji 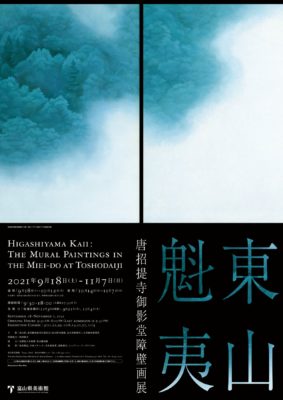 Kaii Higashiyama[1908-1999] is a Japanese painter known for landscape pieces which present tranquil and emotive scenes. He was praised in the Japanese painting world following WWII, and his works still boast steady popularity today.
Although Higashiyama left behind many famous works, his magnum opus is a collection of Mural Paintings which took 10 years to complete. They are found in the Miei-Do Hall of Toshodaiji, a Buddhist temple of the Risshu sect in the city of Nara. The Miei-Do Hall was constructed in 1964 as a place to enshrine a statue of Ganjin Wajo, the high-ranking monk who founded Toshodaiji.
Higashiyama accepted the task of working on accompanying Mural Paintings and the miniature shrine. He created Mural Paintings for five rooms, where a total of 68 murals depict natural Japanese landscapes and scenery from China, Ganjin Wajo's birthplace.

This exhibit will display these Mural Paintings, which are normally not open to the public, for the first time in the Hokuriku region. In addition to Mural Paintings displayed in partial recreations of Miei-Do Hall, visitors can also find an introduction to the world of beauty and prayer that Kaii Higashiyama dedicated to Ganjin Wajo, including sketches he made while walking around various parts of Japan and China.