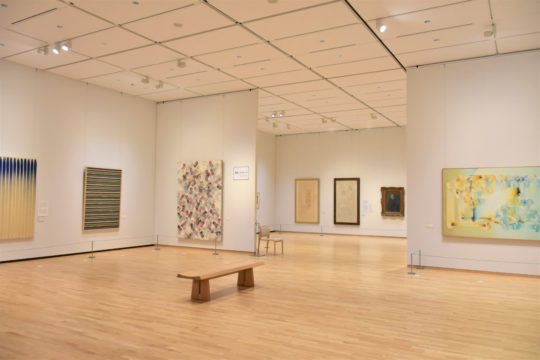 【Life in frame】
This display presents movements from the 20th century with regard to frames—which are a universally important aspect of art—and the portrayal of life as a motif within them.
【Relation-Overlap】
This display focuses on relations within works, such as the relationship between color and shape or figure and ground.
【Scene】
Translating the Japanese word "fukei" as "scene," here we present an array of scenes depicted within works, including scenes that were actually before the artist's own eyes, scenes that were recreated from past memories and records, and scenes from imaginary worlds and stories.
【Human Figure】
In addition to the many different methods of depicting the human figure innovated over time, please also take note of how figures' clothing and surroundings change throughout the ages.
【Brush / Stroke】
This display centers on brushwork. Visitors can see the power instilled in paintings when color is added, and feel the breathing of artists as they carried their brushes across the canvas.